Star Wars: The Rise of Skywalker is a 2019 American science fiction film produced, co-written, and directed by J. J. Abrams. It is the third installment of the Star Wars sequel trilogy and the final episode of the nine-part "Skywalker saga". It was produced by Lucasfilm and Abrams's production company Bad Robot Productions and was distributed by Walt Disney Studios Motion Pictures. The film's ensemble cast includes Carrie Fisher, Mark Hamill, Adam Driver, Daisy Ridley, John Boyega, Oscar Isaac, Anthony Daniels, Kelly Marie Tran, Naomi Ackie, Domhnall Gleeson, Richard E. Grant, Lupita Nyong'o, Keri Russell, Joonas Suotamo, Ian McDiarmid, and Billy Dee Williams. It features the second posthumous film performance by Fisher, who died in 2016 and appears through the use of unused footage from The Force Awakens. The film had its world premiere in Los Angeles on December 16, 2019, and was theatrically released in the United States on December 20, 2019. It received mixed reviews from critics, who praised the acting, action sequences, musical score, and visual effects, but criticized the plot, pacing, and perceived departures from the themes and plot of The Last Jedi.

While the First Order continues to ravage the galaxy, Rey finalizes her training as a Jedi. But danger suddenly rises from the ashes as the evil Emperor Palpatine mysteriously returns from the dead. While working with Finn and Poe Dameron to fulfill a new mission, Rey will not only face Kylo Ren once more, but she will also finally discover the truth about her parents as well as a deadly secret that could determine her future and the fate of the ultimate final showdown that is to come. 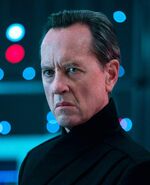 Retrieved from "https://oscars.fandom.com/wiki/Star_Wars:_The_Rise_of_Skywalker?oldid=61571"
Community content is available under CC-BY-SA unless otherwise noted.