Morgan Freeman is an American actor, director and narrator best known for his roles in Driving Miss Daisy (1989), Unforgiven (1992) and The Shawshank Redemption (1994). Although his first credited film appearance was in 1971's Who Says I Can't Ride a Rainbow?, Freeman first became known in the American media through roles on the soap opera "Another World" and the PBS kids' show "The Electric Company". Beginning in the mid-1980s, Freeman began playing prominent supporting roles in many feature films, earning him a reputation for depicting wise, fatherly characters. He has won and been nominated for numerous awards throughout his highly regarded career. He has appeared in over 100 films including such titles as, Brubaker (1980), Street Smart (1987), Glory (1989), Robin Hood: Prince of Thieves (1991), Se7en (1995), Amistad (1997), Million Dollar Baby (2004), Batman Begins (2005), Gone Baby Gone (2007), Wanted (2008), The Dark Knight (2008), and Invictus (2009). In 2004, Freeman and others formed the Grenada Relief Fund to aid people affected by Hurricane Ivan on the island of Grenada. The fund has since become PLANIT NOW, an organization that seeks to provide preparedness resources for people living in areas afflicted by hurricanes and severe storms. 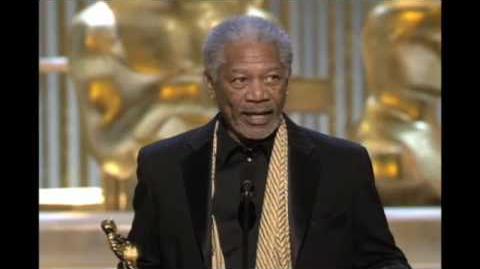