Brokeback Mountain is a 2005 American romantic drama film directed by Ang Lee. It is a film adaptation of the 1997 short story of the same name by Annie Proulx with the screenplay written by Diana Ossana and Larry McMurtry. The film stars Heath Ledger, Jake Gyllenhaal, Anne Hathaway, Michelle Williams and Randy Quaid.

Set against the sweeping vistas of Alberta's Rocky Mountains, this film tells the story of two young men - a ranch-hand and a rodeo cowboy - who meet in the summer of 1963 and unexpectedly forge a lifelong connection, one whose complications, joys and tragedies provide a testament to the endurance and power of love. 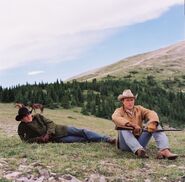 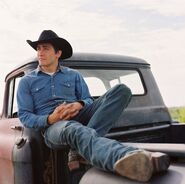 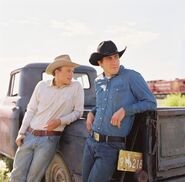 Retrieved from "https://oscars.fandom.com/wiki/Brokeback_Mountain?oldid=53381"
Community content is available under CC-BY-SA unless otherwise noted.