Adaptation. is a 2002 American semi-autobiographical drama directed by Spike Jonze and written by Charlie Kaufman. The film is based on Susan Orlean's non-fiction book "The Orchid Thief". The film stars Nicolas Cage as Charlie and Donald Kaufman, and Meryl Streep as Susan Orlean, with Chris Cooper, Tilda Swinton, and Maggie Gyllenhaal in supporting roles.

Frequently cynical screenwriter Charlie Kaufman has just taken on a new assignment. That is, to adapt writer Susan Orlean's "The Orchid Thief" into a screenplay, all of it based on the life of the eccentric John Laroche, an exotic plant collector based out of Florida. While his easygoing twin brother Donald, is writing scripts with ease, Charlie finds himself on a perpetual struggle that never seems to end. 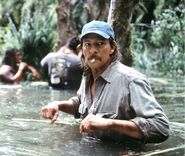 Retrieved from "https://oscars.fandom.com/wiki/Adaptation.?oldid=53432"
Community content is available under CC-BY-SA unless otherwise noted.